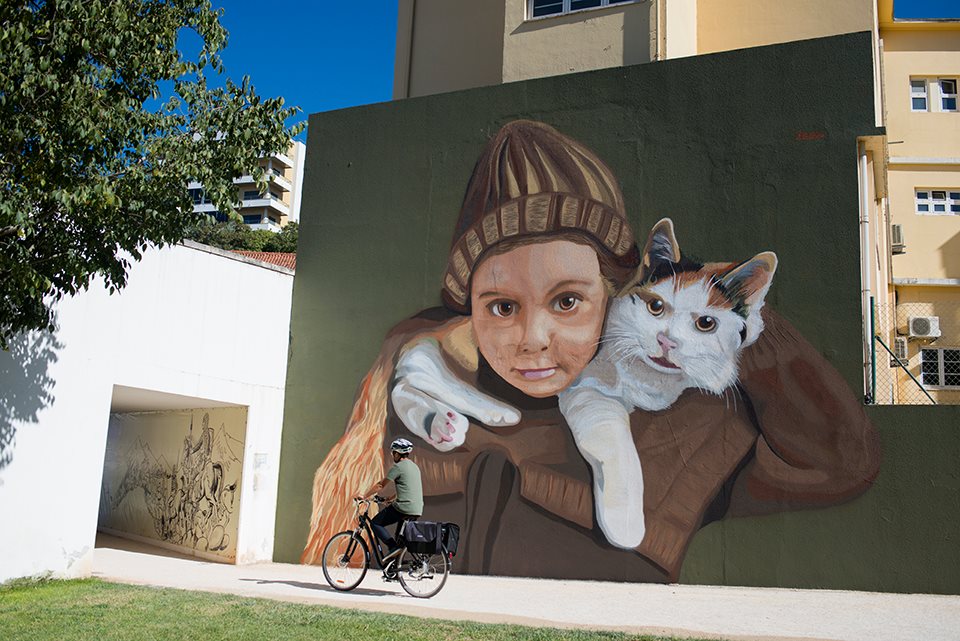 There’s an old saying in Portugal that translates like ‘Portugal is Lisbon and rest is only landscape’. This was a harsh critic on the centralization of opportunities, information and infrastructures that we used to suffer from. But luckily times have changed and some smaller cities are now super dynamic and interesting urban centers with a lot to offer.

Arte Pública Leiria: Paredes com história is an initiative promoted in the central city of Leiria, to celebrate and think about public art. The project was created in 2017 and had a second edition in 2018 developed by Projeto Matilha, in collaboration with the city council and IPL – Escola Superior de Educação e Comunicação de Leiria. It was a two day conference about public urban art and sustainability, and also an intense art event.

“PROJECTO MATILHA is an artistic project, by Ricardo Romero,

which aims to raise awareness of societies for issues related

essentially to human and animal rights.

It assumes an aesthetic language, techniques and a certain provocative

and controversial attitude, choosing the street as the scene

par excellence for its works, respecting and valuing its roots in graffiti.”

Ricardo Romero, curator and mentor of Projecto Matilha, is also the curator for this event that allowed a group of amazing artists to be invited and leave their art in Leiria’s walls. During these two years, a total of 15 works of art are distributed around the city. You can find them everywhere, from the old historical center, to new residential and commercial areas.

Leiria is one of Portugal’s oldest cities, with a medieval castle on the top of a hill surveying the whole city. It’s been a very dynamic city with an alternative and dynamic artistic community, responsible for such cool events like Entre Muralhas, a gothic music festival, or Leiria Film Festival, cool and awarded museums like MiMO and Museu de Leiria and street art is now part of its flourishing cultural scene.

Halfway between Lisbon and Oporto, Leiria is a must visit for all you street art lovers who want to walk around a cool and still pretty much undiscovered city, while enjoying great works by some of the most incredible street artists, both Portuguese and international. We leave you with some amazing examples to tease you!

All pictures copyright from facebook Arte Pública Leiria. Go check out here to keep updated. And discover more of the artists behind the works: PichiAvo, Bordalo II, BEZT.