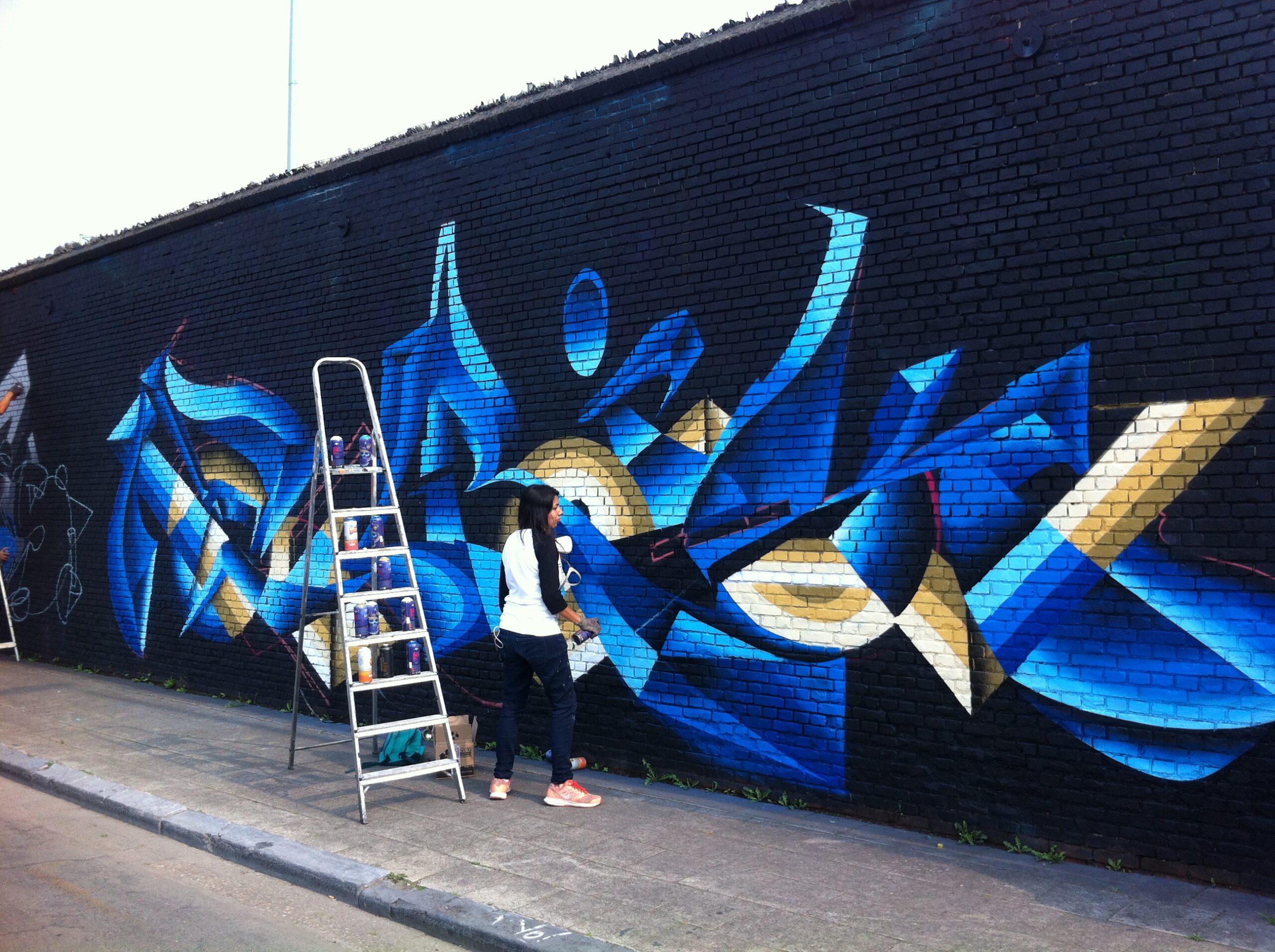 As said before, the organization of Meeting of Styles Belgium 2017 festival did a great job providing music, drinks, some free gifts to the audience and of course walls. But one thing couldn’t have called my attention more than 2.000 m2 of wall: Zurik was the only woman artist in this edition.

Surrounded by more than 50 male artists, Zurik told me that she hadn’t noticed yet there were no female artists except her. What first called my attention was the geometrical form of her letters and the scale of colors (nice blue shades with silver & gold).

Then I saw this amazing work making by an young woman. That moment I felt like the concept broke, a deconstruct of something that my brain was used to associate: graffiti style and male artist.

We know that it is a stupid and conservative association, but the fact is that it happens and it isn’t some particularity about the interpretation of the work. Before every time that I saw graffiti letters on the streets I was connected with the image of a boy with a spray can. It was a kind of “law” in my mind.

I think when I saw Zurik I had a kind of weird reaction. It was something unlikely for my brain, though at the same time my curiosity to get to know the artist and ask a couple of questions to change the previous image I had were triggered. What I discovered is that this non-association of woman vs. graffiti letters happen also in the backstage of the festivals.

After a long talk I could understand that every festival has details in the production that aren’t prepared for woman crew. Simple things like providing 2 toilets for men and women or female safety equipment for bigger pieces, are issues faced by Zurik and all the other girls of the scene.

At a certain point we admit that dealing with woman artists on the street is something quiet recent, and the scenery is still adapting the tools to provide the best conditions for the artists. Some festival-organizers are thinking about the number of male and female artists they invite. Which is cool and also gives the chance to girls to show their talent in huge events. In the best case, they open a wall only for woman and the rest of the walls are for male artists.

If I could give my humble opinion I would say to spread the male and female artists equally and focusing only on the style of the piece instead of the gender of the artist. To face these differences between gender in the street art field the organizations and collectives may be carefully, sometimes good intentions can become a bad réclame.

Street art is made by people that have something to express, it is the unconscious working by itself and your hands being just tools to make it happen. The fact is that the woman body has always been stereotyped and fantasized in the male mind. Some of the pieces are quite uncomfortable for woman audience, but still it is on the streets so the free spirit of expression is always mode on.

Zurik, the young graphic designer and graffiti writer told me that in the beginning these kind of pieces were somehow controversy for her as well. But after a while she got used to the art works and she doesn’t really care about the style (abusive or not) of the draw.

The graffiti gave her the opportunity to travel around the world, the internet helped to make connections and to meet artists from all over the world. Zurik is the kind of artist that prefers to paint on the streets during the day and enjoy the natural light to improve the techniques of her pieces. She is the young woman that helped me to take a close look at the female street art world and see that there is still a lot of work to do.

Many people have a beautiful speech about gender equality and women’s rights but in the real life it is all about talk. People like Zurik are the ones that are really doing something instead of having a great speech, she and other female artists are rocking the street art world in a silent and strong way. Thanks girls!!!

Check out more of Zurik @