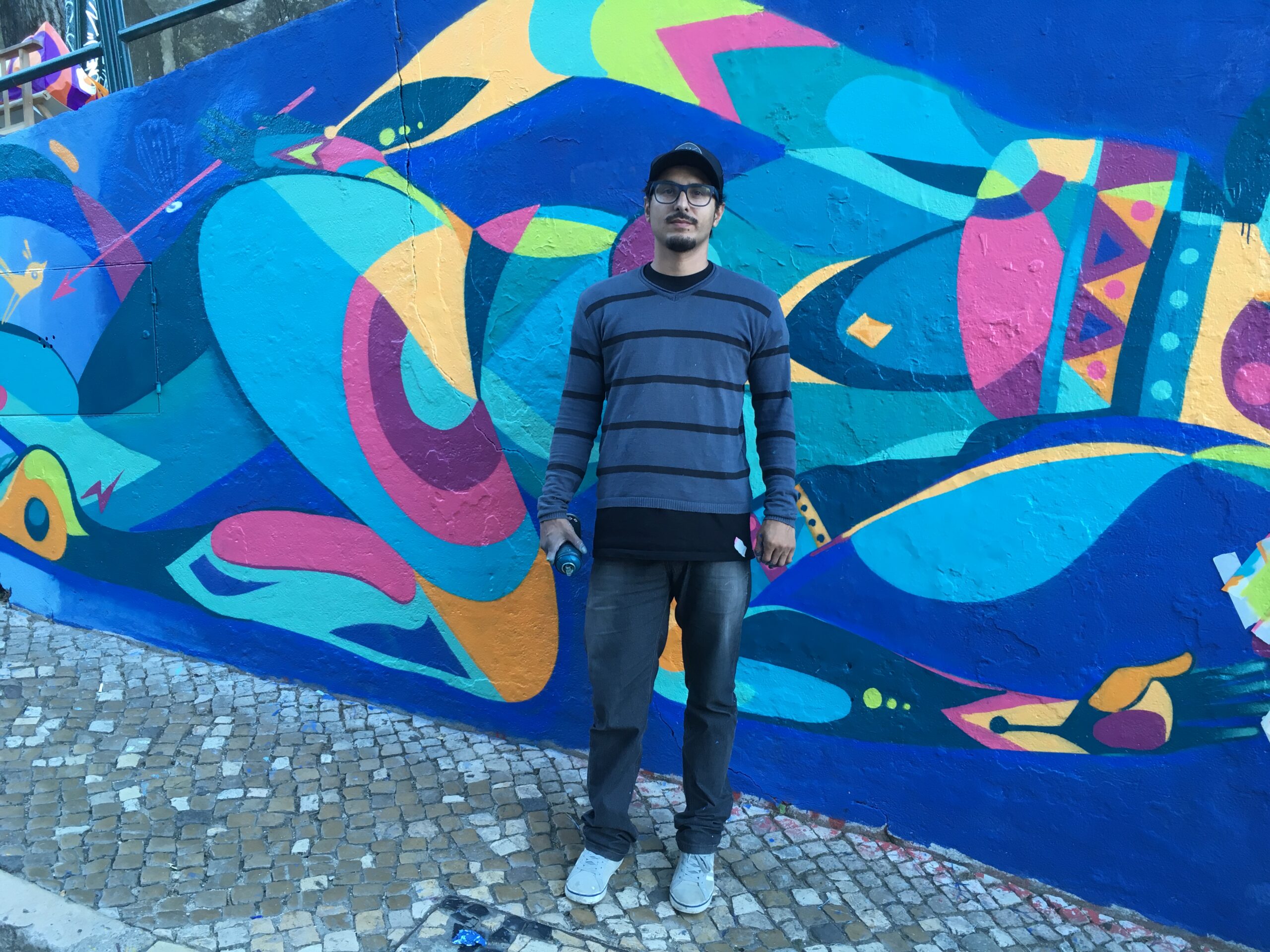 Monday we shared with you a quick preview of the work made by Jotapê Pax in the city of Lisbon. It is a final stop of his Europe trip and he left us such a nice souvenir. We took advantage of his presence in the city to ask him a few questions.

Who are you? Where are you from? Artistic curriculum?
Hello, I’m Jotapê Pax, Brazilian based in Porto Alegre. I started to paint on the streets 17 years ago, in 2000. During this time I made 4 individual exhibitions – two of them in my city (2010 and 2017), one in Rio de Janeiro (2011) and one in Barcelona (2011). I participated in several festivals around the world like Manifesto (Toronto 2010), Meeting of Styles Athens (2012) and Biennal of Graffiti fine Art (São Paulo – Brazil) and also collective exhibitions and other projects of urban art in Singapore, France, Spain, Lithuania and Chile.

What’s your work about?
I believe my work reveals my interest in primitive art. Since I began to scribble I wanted to know how the primitive man left the marks in the caves. After that, the inscriptions on the streets made with spray, in Brazil called “pixação” intrigued my desire to make my own mark in the streets. after some time what caught my attention were the African sculptures, Egyptian art and drawings of the Mayan civilizations.

I believe that the proposal of my work is to merge all my life experiences, visual and anthropological. Whether during a canvas painting or creating a new mural on the street.

When and how come you decide to share your work in the streets?
I started doing some things in my neighbourhood, living in a simple neighbourhood near the center of the city where there was a lot of intervention in the streets. I started spontaneously and began to see it as a way of communicating and making friends.
As I had reference in comics, initially I copied the drawings of my favorite personages and little by little I was finding my own style that defined my personality. When I thought I could spread what I did on paper in the streets, I created courage and made my first play. This was in late 1999, I was 16 years old.

How would you define the places you choose and how your work adds to it?
Usually I look for places where I believe they need better use or buildings where there are null or forgotten spaces. For example, an abandoned lot, or the wall of a building without windows and without life. In this way I draw the attention of the population. This is a way to improve the public space and still leave a free art work for the public, who often do not have time or money to visit museums and galleries.

How would you describe your style?
I believe my work is constantly evolving. Every day I learn new things and I insert in my painting process. Urban art gives me this freedom. Being in the streets, in the galleries or doing commissioned jobs have different points of view and forms of suitability. For me, they are all different ways of doing the same thing. My work first of all has an inner proposal, a personal need to abstract the problems of the world and let me think light. I have found a way to lead my life by doing what I love, and that defines my work today.

Thank you Jota for your time and effort and we hope you join us soon again in Lisbon for another – and maybe even bigger wall  ; )