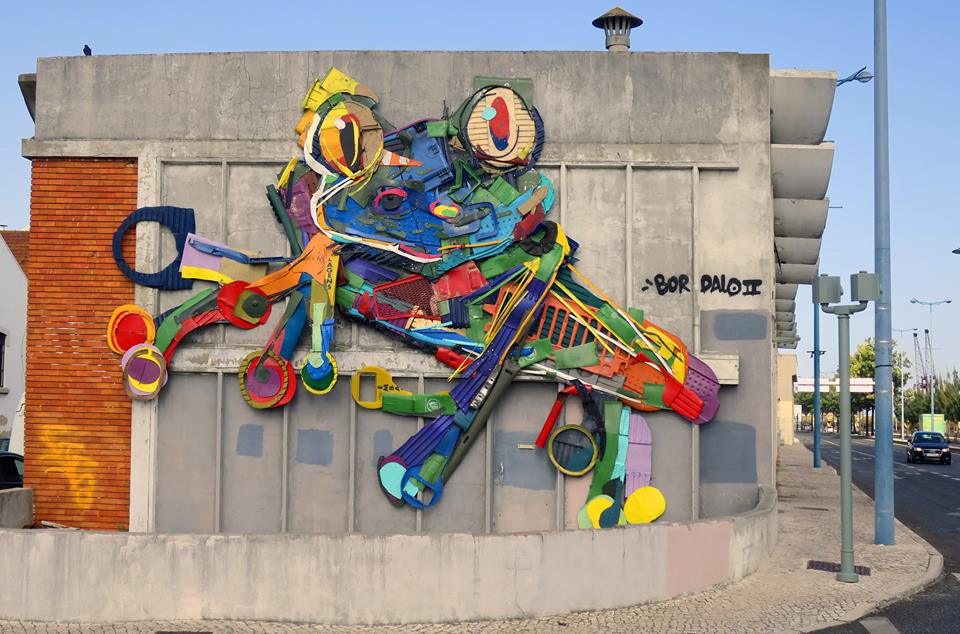 Turning a vandal into a hero* by turning trash into art. A thin boundary between what is called graffiti and what is labelled as street art, what is legal and what is produced illegal, between the significance of an artist and a die-hard activist. At least when we highlight the works of Portuguese street-artivist Bordalo II, we definitely do not want to put him into just another box, to admire and absorb the message behind his Big Trash Animals. And as mentioned last week… in times where gifts are shared all over the place and consumerism is stimulated with holy characters like Sinterklaas and Santa Claus, we share with you the second part of our RECYCLING-serie, focussed on the use of PLASTIC.

The first synthetic plastic goes back to 1907 where Bakelite came to the world by the Belgian/American Leo Baekeland. It was the first plastic not to be originated from plants or animals but from fossil fuels… and the rest of the history is known. It is a devastating reality to get into the use/abuse of plastic in this world. « It is estimated that up to 12 million metric tonnes of plastic enter our seas worldwide every year (greenpeace). »

Bordalo II, having his roots in the graffiti world and inspired by his grandfather Real Bordalo, though not only known for his plastic creatures, is a young provocative artist aiming with every piece delivered in the streets or even in exhibitionspaces a sense of criticism. Highlighting the important factor of sustainibility and ecology, he tries to awaken our social awareness. How?

Comfortable with the use of mixed media, he questions the behaviour of humankind (aka our own behaviour) marked by overconsumption and self-destruction-in-disguise. He represents his own interpretation of the reality surrounding us all within his installations made out of trashparts, may this be carparts, tires, garbagebins, toys… .

His Big Trash Animals-serie is one of his original ways to recycle, reuse, create, recreate and assemble an incredible creature camouflaging with all kind of colours the result of our habits**.

YOU visited his exhibition or you captured an amazing shot of one of his animals all around the world? Share your results and/or tips & tricks on our (#yesyoucanspray) facebookpage !

Just like last week… we can recommend this lovely website of RECYCLART with an immense amount on tutorials based on repurposed, recycled, reused, reclaimed, upcycled and restored goods all kind ; )

* «Turning a vandal into a hero. A world of controversies trying to capture the thin boundary between legal and illegal walls in Lisbon painted by…» article.

** interview with Bordalo II in issupportstreetart.