ARTIVISM: THE BREASTS THAT FREE THE SPEECH

Free your body, be proud of you and break the taboo ! This could be Intra Larue’s mojo. This French-feminist artivist spreads sculptures of breasts all around the world. Firstly doing this for fun with some of her friends, she realized the strength of the message that her small sculptures could bring. 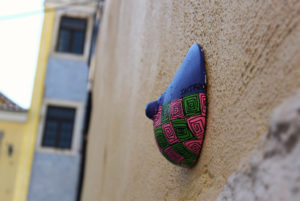 First of all, boobs are the representation of feminity and are often used to spread an erotised image of women. The boob is synonym of sensuality, and is often instrumentalized and objectified. Out of this sexual context, the representation of boobs can provoke discomfort, can be a taboo. But a lonely breast, separate from the body he belongs to can also makes us think about breast cancer, that sometimes imposes its removal. The breast can thus be a representation of a feminine pain, or a loss of feminity. 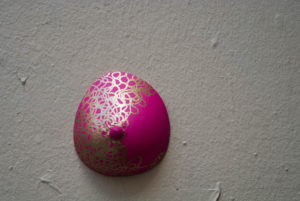 This artist decided to spread her messages thanks to her colourful creations, hiding them or putting them in inaccessible places to provoke some challenge and show the independance and the strenght of women. Choosing this symbol is a way for her to downplay all the taboos and free the speeches. Her sculptures well represent the breast with it details and sometimes, she adds some symbols like a tie to show also the strong hold men have on feminity and its representation.

Her work had a really quick success and she was victim of a lot of robberies. She thus had to change the material she used for her sculptures and started to make them of very thin plaster. This way, it’s impossible to steal the boob without breaking it. It also can show the fragility of feminity in front of a patriarchal society. 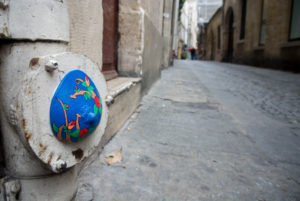 Intra Larue likes to challenge the viewer, she wants to express herself while staying anonymous. To her, the most important is the message she wants to spread. And we can say that this is efficient, because usually pepople talk a lot when they see Intra Larue’s sculptures : their attention is cought by vivid colours, and they ask themselves what it could be. 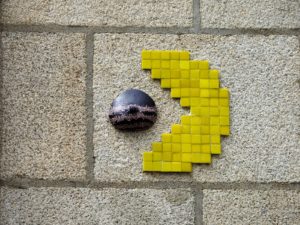 We can say that Intra Larue’s work is provocative, very smart and original, and we are very proud of having the mark of this strong artist in our lovely city of Lisbon.