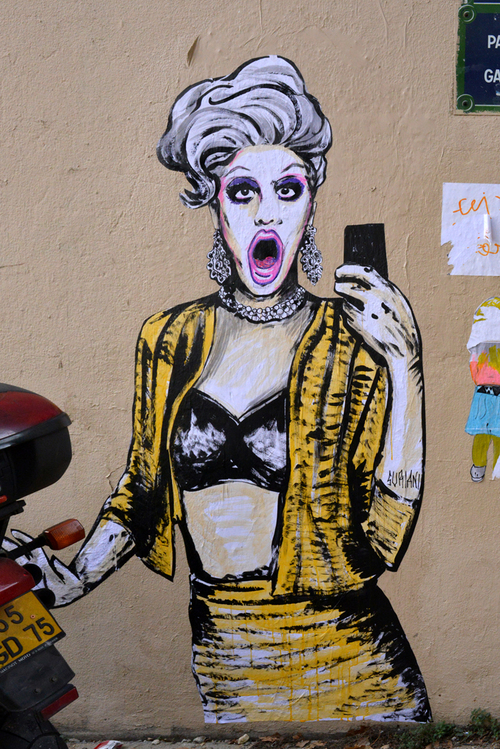 ARTIVISM: SURIANI THE ARTIST WHO USES ART TO FIGHT INTOLERANCE

“If you can’t love yourself, how in the hell you gonna love someone else ?” This sentence by RuPaul, the famous American drag queen, singer and actress really well depicts the idea of her show, RuPaul’s Drag Race, the contest of drag queens that promotes pride, self love, liberty and equal rights. Very inspired by the strong messages given by the show, Suriani, a Brazilian artivist decided to represent some of the Drag Queens of the show in the streets to give an answer to intolerant people and conservative minds. Who is Suriani and why did we want to introduce him to you?

Suriani was born in São Paulo. He studied architecture, urbanism and Fine Arts, and we can find all these influences on his work. Indeed, he succeeds in mixing his art with the city structures, and his work perfectly matches in the streets. He moved to Paris in 2007 and that’s when he started to conquest the streets.

He creates hybrid characters in order to represent urban diversity. He often mixes animal heads with human bodies. We really feel that this amazing artist feeds himself with the culture of the countries he goes in and that his art evolves with him. “Urban jungle”, “Street cats” or “Street Queens” are some of the subjects he depicts.

His main idea, that we can read on his website is: “Occupying the streets with art is a form of resistance. Free expression – Free bodies! ». We couln’t agree more with Suriani, who defends what we stand for : an engaged art at the service of human rights. He is very committed, as can testify his last works in Paris after the massive manifestation from the right and conservative wing against gay marriage and adoption. He decided to occupy Parisian streets with portraits of famous drag queens. To him, this was an answer to intolerance and a way to express his ideas and fight against hatred thanks to art. Representing drag queens, symbols of pride, equality of rights and love is a way to provoke the closed minds and spread positive messages. This hommage to gay and queer culture is present on the walls of Paris, São Paulo, New York and San Francisco.

Suriani is a wonderful artist: we love his original style, the values he stands for, the way he communicates with the street and his huge talent. We really encourage Suriani to keep on enchanting our eyes and minds with his pasteups and we invite him with great pleasure to embellish Lisbon’s walls with his hybrid characters. Suriani, estamos à tua espera !

Waiting for his visit, we warmly encourage you to check his work on his insta page (@surianiart) or on his website (www.suriani-art.com).