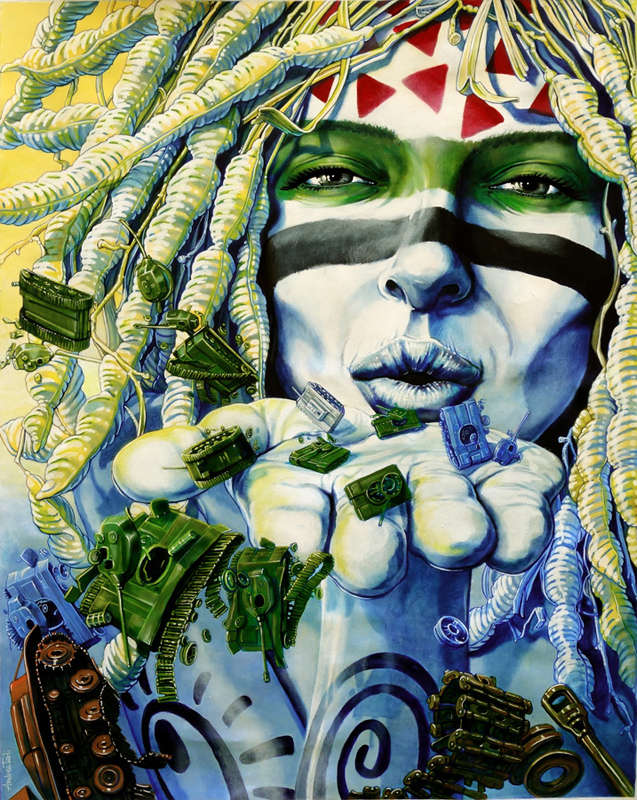 “Painting isn’t born for decoration of private houses. It is a tool of defensive and offensive war against the enemy.”

Andrea Tarli chose this sentence from Picasso to explain his need to paint, adding :« It must belong to everybody, like music coming through a window. »This could help building the definition of artivism, that is to say, using art like a weapon not only to spread good vibes but also to denounce, highlight, defend or express oneself. Also, sharing his art in the streets is a way to include everybody in it, without excluding people because the street belongs to everyone.

Andrea Tarli is an incredibly talented artist who already did thousands of works all around the world and keeps amazing us since 2004. Between outdoor and indoor, his aim is to use art to defend his ideas and maybe give a voice to the unheard, the minorities or the ones who can’t say it. Pollution, discrimination, violence, selfishness, no evil of today’s society escaped his critical gaze. He has this very intelligent and delicate vision of society and loves to highlight its fragilities and aberrations, always in a sensitive but striking way.

Because we think his work is so powerful, no word needs to be used to explain it. We just selected few pictures from his artwork and decided to let you enjoy it and interpret it as you wish.

In 2016, Andrea Tarli made us the pleasure to participate to the festival Paratissima, during which he let his mark in our lovely city of Lisbon, and we are still popeyed by the beauty and the strength of the two main artworks he created here. This Festival is a collaborative project created by EBANOCollective to promote artists in different fields such as visual arts, plastic arts, videos, design or fashion. The aim was to use the urban space to share artistic expressions and draw a bound between artists and public, but also between the streets and the talents.

We warmly encourage you to check his work on Facebook (Andrea Tarli), Instagram (@andreatarli_art) or on his webgallery, where you’ll find all his creations since 2004 (https://andreatarli.it).